As each year draws to a close, I enjoy taking a moment to go back through photographs made during the past twelve months and highlighting those that mean the most to me. I usually choose my favorites based on the physical and emotional experience I have, and it really does feel good to reflect on time well spent in places I enjoy. I have to admit, I also get a kick out of using the camera to technically create something I like to look at… making memories that will forever feed my soul. I hope that as each year passes my photographs get better – whatever that means – or at least that they invoke stronger feelings within me, both while breathing in and out perched on the rocky Atlantic shoreline, or now, as I sit here typing and reminiscing about early morning wake up calls and fingers crossed in anticipation of dramatic clouds and good light. Anyhoo… most of my 2011 favorites are – surprise, surprise – from Acadia National Park and the coast of Maine, although this year I also have a couple from a memorable March trip back home to Ireland with my oldest son Sam. Drum roll…

I had been itching to get out with the camera again, so I decided to visit one of my favorite places and see if I could capture some snow blanketing the famous round rocks below Otter Cliffs. An early start this morning got me here about 45 minutes before the sun was scheduled to crest at 6:36am, and as always, I had the place completely to myself. Though the temperature was certainly chilly, there was little to no wind blowing, and since I was dressed in several layers, the 13F actually felt quite comfortable. 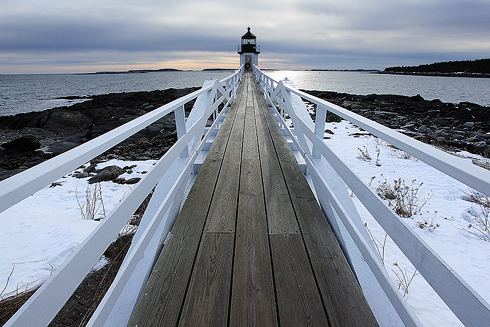 I spent a very enjoyable late afternoon exploring the area around the Marshall Point Lighthouse in the mid-coast community of Port Clyde. Originally established in 1832, the present lighthouse was built in 1857, and this is the same lighthouse Forrest Gump visited when he was traversing the country. This lighthouse is pretty unique in it’s design, with a 31 ft tall white granite and brick tower perched on the rocks at the end of a narrow walkway. A distinctive and striking black cast iron lantern houses a fresnel light that does not flash any more. The Marshall Point Lighthouse Museum on the first floor of the light keeper’s house was opened in 1990, and the whole area is meticulously cared for and maintained. 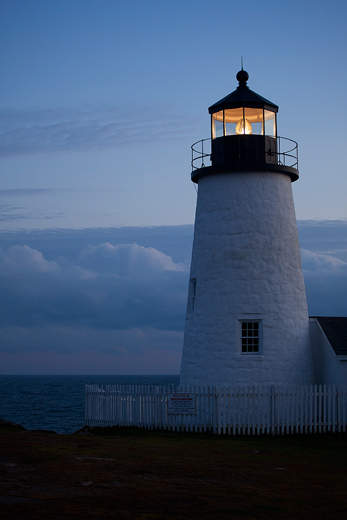 Standing near the ocean as the night rolls in can be a somewhat unnerving experience, especially with the wind trying to knock you over and huge waves crashing in the not too far off distance. At the end of the day, the warm light from the beacon was quite comforting as I made my way back toward the car. I stopped one more time to soak in the scene… that’s when I saw this view of Pemaquid Point Lighthouse.

I can remember visiting the Gap of Dunloe some 20+ years ago with Lori and some friends, and on that occasion we traveled in style with Dolly… the farting horse. Locals provide horse-drawn traps for the ride up to the gap, and the day we went we had a wet and windy journey up the hill, pulled by our horse who tooted all the way. This photograph is from when Sam and I visited Ireland last spring, and even though the classic greens associated with the Emerald Isle weren’t yet in full force, this was still a striking scene.

Every single time I pass over the bridge that spans Marshall Brook I find myself staring at what I consider to be a breathtaking scene. There is something about the view laid out before you that catches my eye every time… no matter what the time of day or the prevailing weather conditions, I find myself always having to pull over. Looking north across the Bass Harbor Marsh toward Bernard (left) and Mansell Mountains (right), the eyes are treated to a snaking river that gently winds its way off into the distance.

I spent an immensely peaceful early morning perched on a ledge overlooking the Atlantic Ocean, and I couldn’t help marvel at how this is a very cool way to start the day. The sun rises before 5:00 a.m. in the summer in Maine, and as you can see from the photograph above, the pre-dawn light on this particular morning was pretty special. When the sun eventually crested over Great Head behind me, it bathed the scene in amazing warm light, with the granite absolutely lighting up with color. This view is looking south along the rugged Acadia coast toward Otter Cliffs, and other than a couple of seagulls who kept me company on the ledge, I was here all by myself. 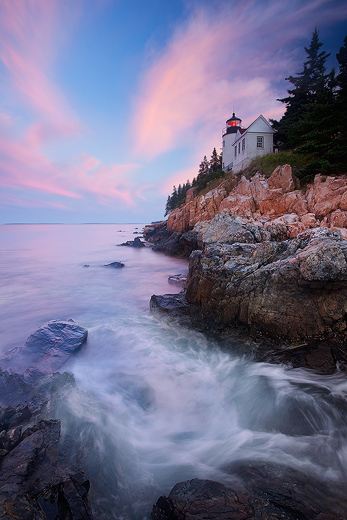 So… I wasn’t expecting the conditions to be particularly special on this morning, but as the light slowly climbed from the east up and over my shoulder toward the lighthouse, I started to wonder if I might actually be in for a show? There were some soft, wispy clouds behind the lighthouse, and as the day began to brighten, my jaw literally dropped as I marveled at how the high clouds were being illuminated with a phenomenal pinkish hue. Knowing that the light probably wouldn’t last long, and with a big grin on my face, I worked quickly to try to combine all of the elements within the frame into something I liked. I couldn’t have ordered better weather conditions, and the impressive lighthouse that welcomes returning mariners to Bass Harbor certainly did its part.

Taking the Slea Head Road further west out of Dingle, we spotted a little harbor tucked into the rocks with a pretty beach. From a distance it was beautiful, and up close… even nicer. Looking over our shoulder though, we saw what looked like a path winding its way up the hillside toward the ocean. Eager for an adventure and the possibility of a nice view, we started hiking. I thought I was going to have a heart attack… too many Irish breakfasts and too much Guinness lately had me struggling to keep up with Sam. When I finally did get to a flat spot, I dropped my backpack and told him to go on ahead… I needed a rest. The headland we were on was called Dunmore Head (I think), and from here you can see Great Blasket Island straightaway, Inishnabro and Inishvickillane off to the left, and to the right is Beiginis and then Inishtooskert.

There’s something about the fleeting appearance that Lupine make here in Maine which I really like. They explode onto the scene as the weather warms up at the start of June, but by the time July rolls around they are already starting to fade away. They are scattered all over the side of I-95 as I make my way down and back to work, and maybe it’s because they brighten my commute at this time of year, but I love the splash of color they add to the landscape. We went camping one weekend in mid-June… and despite the rainy weather, a good time was had by all. Late on the Friday afternoon we wandered up to the Beech Hill Road to hike the Canada Cliff Trail, and along the roadside we encountered a field absolutely brimming over with my favorite Maine flower… Lupine. 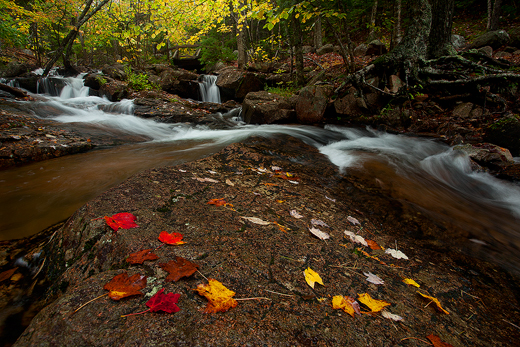 If you want to discover examples of fall foliage colors in a pretty Acadia location, look no further than the path that runs alongside the Jordan Pond Stream. Starting out behind the Jordan Pond House restaurant, find the stepped trail entering the woods leading down to where the carriage road meets up with the stream, cross the bridge and make a left turn to follow the stream downhill and you will be treated to not only the soothing sound of running water, but also the wide array of foliage colors typically associated with a classic New England fall season. 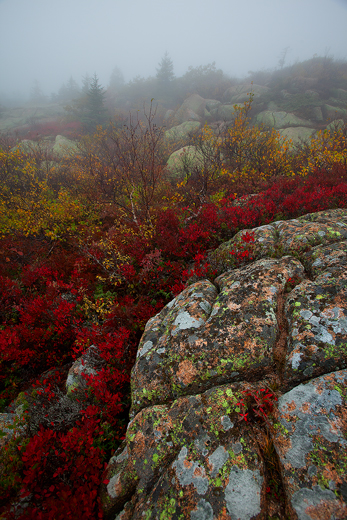 I had looked at the weather, and with a forecast of light rain and cloudy skies, it seemed like the perfect time to make a quick run down to Acadia before the fall foliage was all gone. I knew that the overcast weather and foggy conditions would offer nice even light in which to photograph the changing autumn colors at the top of Cadillac and the rejuvenated, rain-fed Jordan Pond Stream. First stop Cadillac… there is something special about being on top of a mountain when it is socked in with clouds and you have it all to yourself, and when that mountain is Cadillac, I’m in heaven. 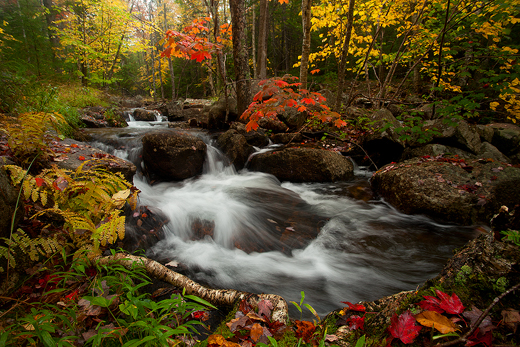 Fall foliage season comes and goes pretty fast around these parts, and when you factor in the potential for poor weather and the usual work commitments, chances are I might only have a couple of opportunities to try to make some photographs displaying the changing colors. This was the first photograph I made on a cool, rainy morning spent exploring the banks of the Jordan Pond Stream in Acadia National Park.

31 thoughts on “My favorite photographs from 2011”