On our way home from our wild west vacation, we were excited to be able to stop in New York City to visit Lori’s aunt Joan. Joan lives in Chelsea, a really cool part of lower Manhattan. Walk south 20 minutes from Joan’s apartment and you are in Greenwich Village, and the same distance north gets you to the hustle, bustle and energy of mid-town. We had a good visit with aunt Joan, and it was great to see Carlo too. 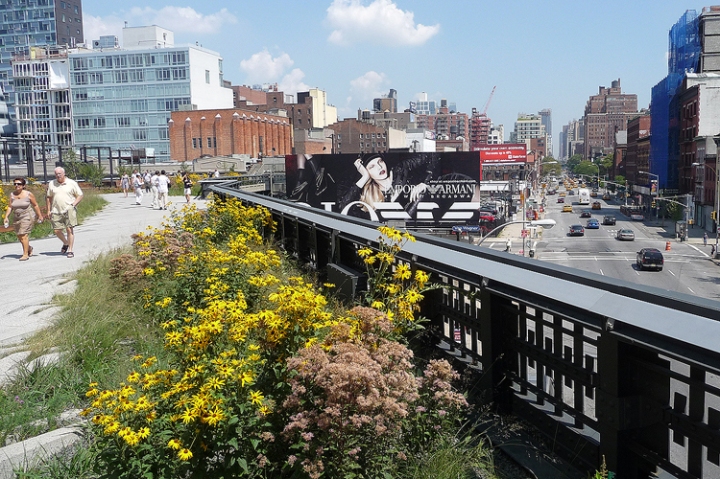 Before heading out of the city and up to Northampton for the night to see Lori’s sister on our way back to Maine, we planned a short trip to a new park in NYC. The High Line had just recently opened, and it has a really interesting history…

The High Line was built in the 1930s, as part of a massive public-private infrastructure project called the West Side Improvement. It lifted freight traffic 30 feet in the air, removing dangerous trains from the streets of Manhattan’s largest industrial district. No trains have run on the High Line since 1980. Friends of the High Line, a community-based non-profit group, formed in 1999 when the historic structure was under threat of demolition. Friends of the High Line works in partnership with the City of New York to preserve and maintain the structure as an elevated public park. The project gained the City’s support in 2002. The High Line south of 30th Street was donated to the City by CSX Transportation Inc. in 2005. The design team of landscape architects James Corner Field Operations, with architects Diller Scofidio + Renfro, created the High Line’s public landscape with guidance from a diverse community of High Line supporters. Construction on the park began in 2006. The first section, from Gansevoort Street to 20th Street, is projected to open in June 2009.

The idea of turning old train tracks into a green area and public park intrigued us, and we were amazed with what we saw. The design and layout of all of the High Line elements – everything from the railings, to the benches, and the wonderful landscaping – though not yet complete, all meshed together in a very stylish way that effectively celebrated both the history and feel of the old train tracks. 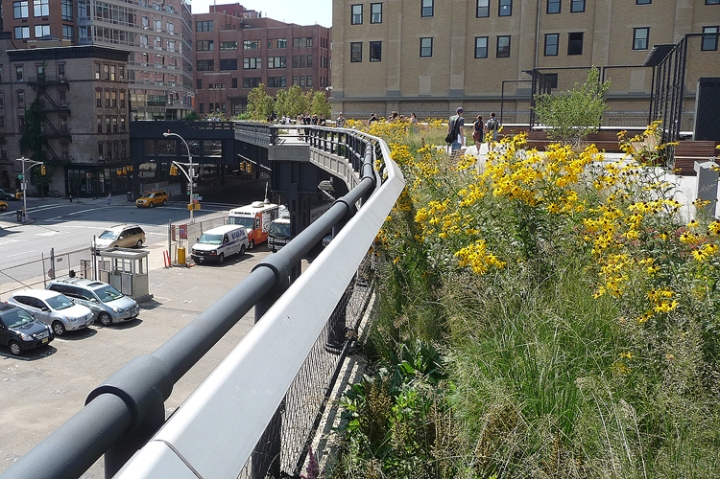 As we walked The High Line from 20th Street to Gansevoort Street near Greenwich Village, it was almost surreal to be wandering along such a beautiful pathway right above the streets of one of the busiest cities in the world. Kudos to the “Friends of The High Line” who fought so hard for the preservation and restoration of what is undoubtedly a wonderful addition to NYC. If you ever get the chance to wander along The High Line, take it… you won’t be disappointed.

Our Sunday stroll through (over) the streets of New York City was certainly enhanced by our experience on The High Line, and our brief stopover in the city was rounded out perfectly with a couple of pies from the renowned “John’s Pizza” on Bleecker Street. Ahhhh NYC pizza… nothing compares 🙂